The transformation began when the college purchased the Harkins Movie Theatre, a vacant movie house built in 1979, to drive student interest in the arts and offer a broad range of musical, dance and theatrical performances. Designed by Jones Studio of Phoenix, the $10.3 million, multi-purpose facility, opened as the MCC Performing Arts Center in 2014, an enduring public face of the institution’s music and theater programs. In addition to a 462-seat main theatre, the new 44,000 sq. ft. structure features a full complement of classrooms, practice spaces, faculty offices, shops and a lobby

Serving as the project’s lead designer, Brian Farling, AIA and a Principal at Jones Studio, modeled the center’s architecture on the creative re-purposing of cherished songs and a deep respect of the Sonoran Desert. Comprising the center’s inner and outer shell the variety of masonry was chosen both for structure and finish. For example, the architectonics of the new performance hall were defined by two separate enclosure shells and a steel frame. The exterior shell is a composition of exposed masonry and raked, unpainted cement stucco over metal stud framing. The second is an interior exposed masonry enclosure that defines the primary acoustic volume of the hall.

The sound chamber was also designed by Farling so that its Echelon Trendstone ground-face masonry units would strategically bump from the walls and serve as an excellent sound reflector. Moving north along the side walls, the bumps change from a module of five masonry units wide by five units tall, all the way down to a single 8x8x16 offsetting in and out to create small bumps. This variation in size allows for the smoother surfaces, or large bumps, along the front sidewalls to provide stronger early reflections that improve clarity. The smaller bumps along the rear sidewalls offer more diffuse reflections to enhance sound envelopment. The side walls of the hall were also scalloped in a series of convex curves to ensure sound waves are sprayed evenly throughout the audience chamber.

While the exterior shell features the standard gray 8x8x16 CMU block that transitions to charcoal color with graphics depicting the opening notes of Gershwin’s Rhapsody in Blue, the interior acoustic shell utilizes the same charcoal color, but with Trendstone’s smooth, polished ground face. This acoustic masonry shell has many jobs to accomplish: sound distribution, interior structure, a durable finish and a visually rich interior. The Trendstone’s density provided an excellent surface for the reflection of sound. 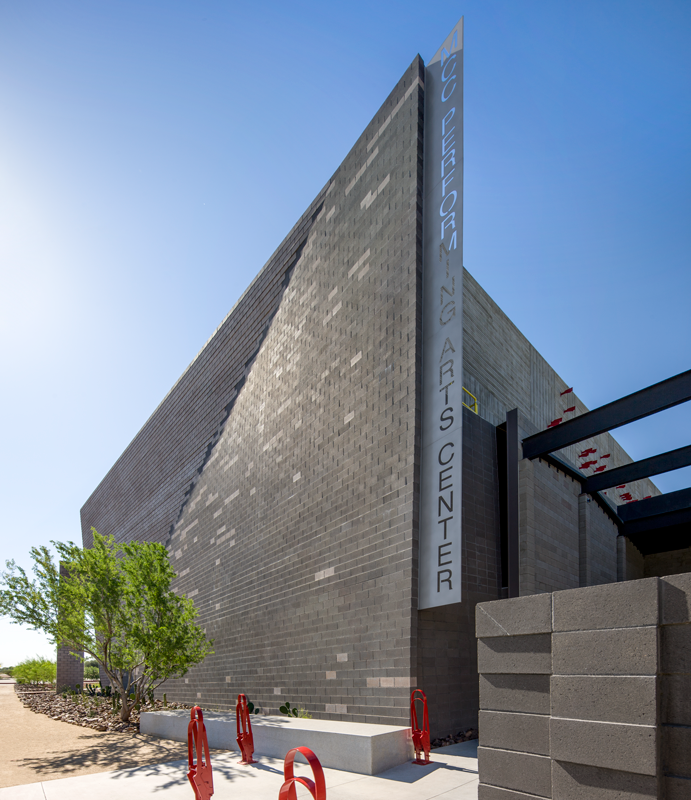 The north and east exterior walls of the new performance hall were also arranged with a running bond pattern and sloped and folded to both emphasize the vertical marquee sign marking the main entry courtyard. The folded masonry wall slopes away from the sign, lifting it up to emphasize its presence. The slope is two-degrees off the horizon and was achieved by carefully cutting the stem courses of the masonry at the footing. 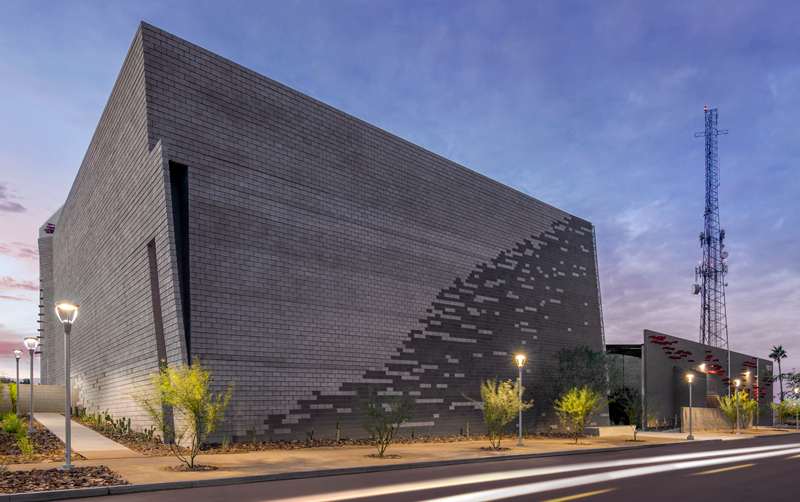 This “marquee” wall was folded by virtue of an offset coursing detail that slips each block a maximum of 5/8” off center from the one below. The line of the fold ascends diagonally across the north elevation and has no offset. As the wall splays out in either direction, the offset goes from zero to 5/8”, creating the fold. This is further supported by the blending of gray and charcoal-colored 8x8x16 concrete masonry units at this diagonal.

Protection Against the Elements

Another integral design component were the interior transitions to the exterior shell, which were constructed with Echelon’s matching colored concrete blocks featuring an integrated water repellent, as does the Amerimix mortar used to install it. Arizona is mostly thought of as a dry, sun-drenched geographic area. But according to Farling, “When you have heavy, violent and sustained downpours on a building that sits in the sun and bakes most of the time, the results can be rapid degradation. Unlike buildings in other climates, the sun and rain work together in a dance that can be very hard on the exterior envelope. For that reason, water repellent in both the block and mortar were essential.”

Arizona’s powerful rains were also prominently referenced in the form of sloped folds that capture and funnel the rainwater into a flowing waterfall found at the northwest corner of the new building. “We passively harvested rain from 17,000 sq ft. of the roof, which drains into a sort of “knuckle” with a hole in it—so with every rainfall you get a waterfall, emphasizing the infrequent occurrence,” said Farling. The waterfall’s downspout was also designed as the counterpoint to the vertical marquee sign marking the main entry courtyard.