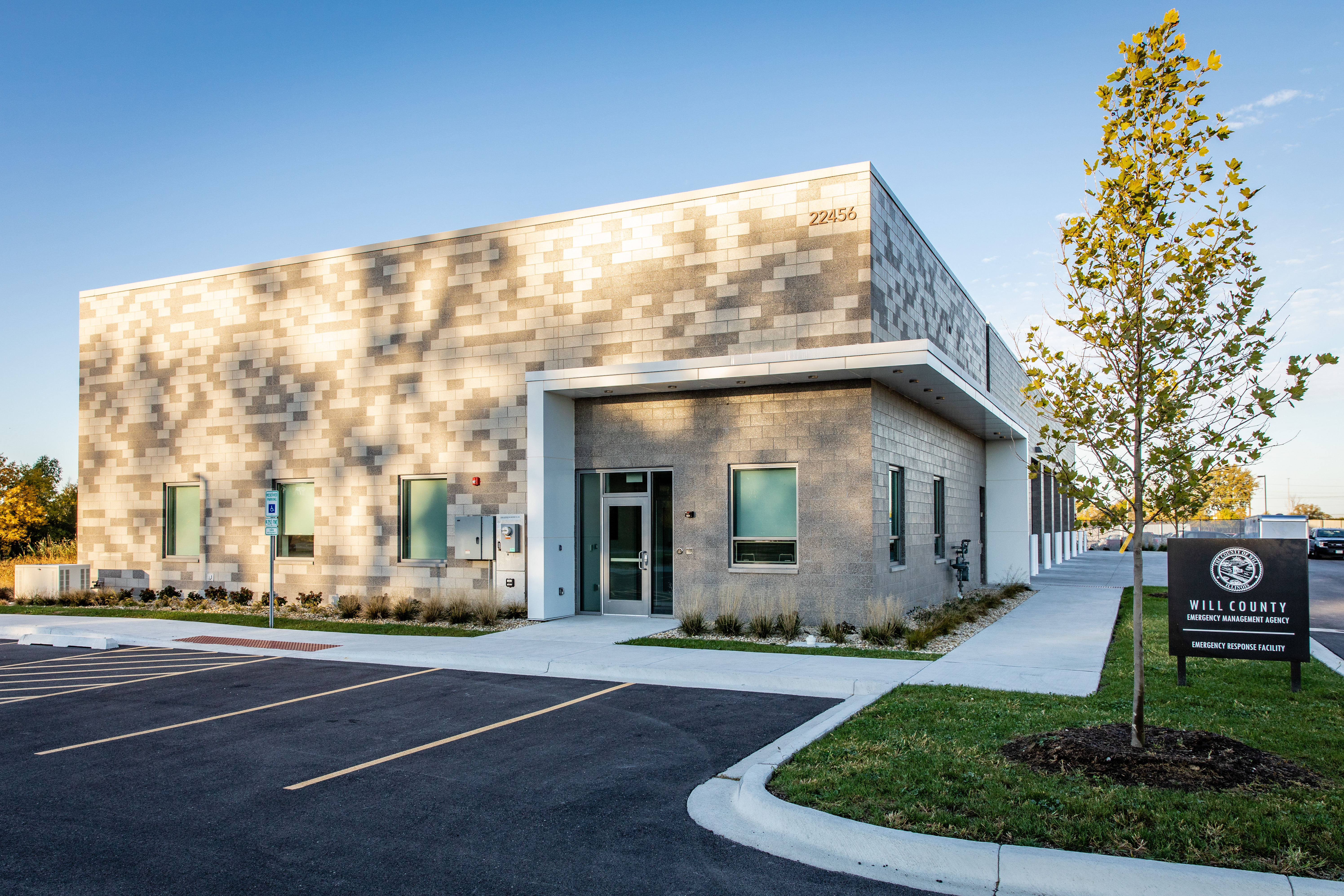 The Will County Emergency Management Agency (EMA) is responsible for coordinating the emergency and disaster mitigation, preparedness, planning response and recovery efforts of the County in conjunction with the State of Illinois and other entities.  The agency was previously operating out of two separate buildings that were not their own, housing their vehicle fleet as well as a training program there. For several years, Will County had been working to consolidate many of its functions in one central location and had already constructed a new Sheriff’s Office and Division of Transportation on county-owned land. In 2019, the County decided to construct a new EMA building on the site. They specified the new building be constructed using Echelon’s Insultech™ System, which had been used for the Sheriff’s Office.

“They were happy with their experience with Insultech and liked the durability of the product,” explains Danielle Appello, associate principal and project designer with Wight & Company, the architect for the project. “The Sheriff’s building and the EMA had the same type of use, where a large portion of the building is dedicated to equipment storage and the rest is office space, so it made sense to use the same material on both, especially given it was one they were already happy with.”

Wight & Company was about half-way through planning the County’s Animal Control facility at the complex when they were approached about the EMA facility. As a result, they were able to design and plan both simultaneously and the shared site planning helped reduce cost. Savings were also gained by using the same contractor for both buildings.

“The Sheriff’s Office really set the tone for the design since it was the largest building on the site, with the similar bay and office space configuration,” explains Appello. “Additionally, the EMA was going to be a tall building visible from the road, so we wanted a really polished feel and some personality at the front entry.”

The design of the building is modern, but the mood it conveys was inspired by the fields and natural environment of its surroundings. “The horizontal elements of the building reflect a lot of the lines seen on the prairies in the area, giving it sort of a modern farmland approach,” says Appello “We were able to create variations and a textural approach with the different masonry units that helped break down the building’s scale.”

Designers looked at the range of Echelon products available for use with the Insultech, preferring a smooth texture for this building. Echelon’s Trendstone® ground face masonry units were used most prominently. On the front of the building, Appello explains they chose to use contrasting colors Granite Gray and Sandstone to make it stand out from the other three-quarters of the structure. “We relied on that interplay of color and texture to highlight the offices and training component, so people knew where to enter and where the activity was in the building. The rest of the building used the Granite Gray as a stand-alone so that kind of recedes in the background.” Echelon’s Mesastone® textured masonry units in Shadow Gray is used as an accent between the building’s office and storage bay areas.

The approximately 11,500 square foot building opened in February, 2020. Being purpose-built, the center was designed specifically for the number and sizes of vehicles the county owns. The flow of the offices was also carefully thought out. The building now houses a Mobile Command Vehicle and other fleet vehicles used in emergency situations. The climate controlled, seven-bay vehicle storage area provides ample space for the fleet and accessory support such as battery charging and dispatch notification.  There are also a training room, kitchenette, and support offices with direct access to the vehicle storage area.

“This was our first time designing with Insultech and we saw a lot of good opportunities and a range of choices. It was a pleasant experience figuring out its application for this project and we’d definitely use it again,” says Appello. “The durability, fact that it was an all-in-one system and efficiency were a plus, and we’re obviously happy with the fact that it looks like something other than a standard CMU building because of the range of colors and finishes available.”