When John Madden of Tulsa, Oklahoma, initially began looking into Echelon's Artisan Masonry Veneers® line, his company J. Madden Homes, LLC, was looking for lightweight veneers that would qualify for credits under the National Association of Home Builders (NAHB) ICC 700 National Green Building Standard™. What he found was a product that not only qualified under multiple sections, it offered so much more than he expected. 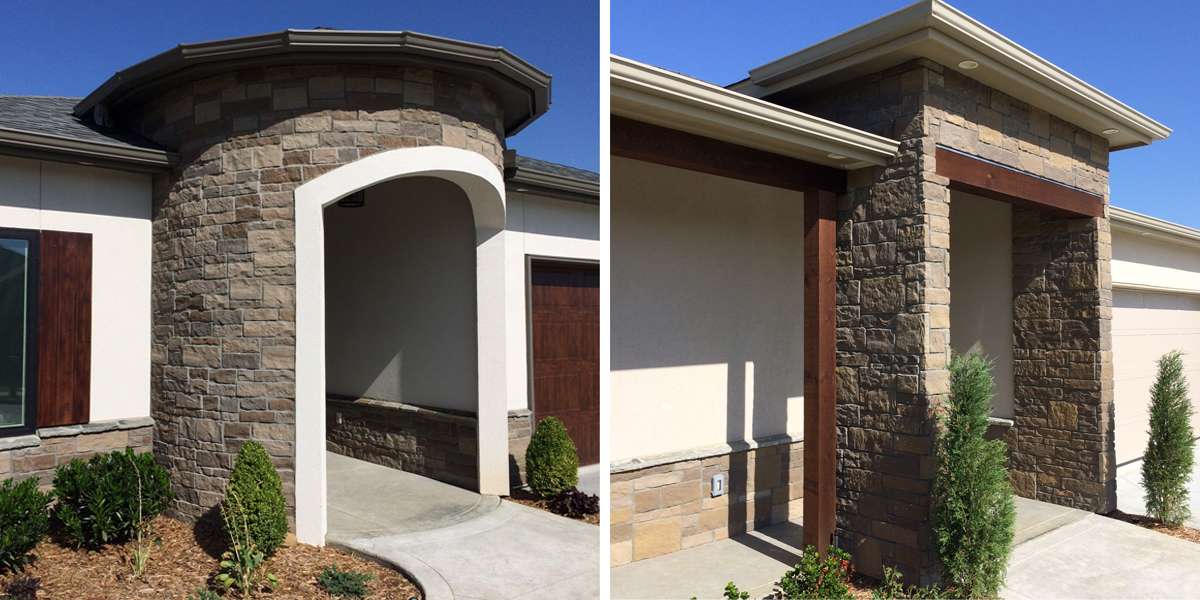 “I was extremely impressed with how the Artisan system goes together,” Madden said. “The masons really like it, and the homeowners absolutely love it.”

Madden’s first experience with Artisan veneers was to build two spec houses, which both used a blend of Kenley™ Stone Thin Veneer and Hillcrest™ Stone Thin Veneer. The veneer products were blended to create dramatic entryways for each home, and as wainscoting to break up the stucco exterior. “I like to mix styles and colors, and the Artisan veneers are packed in a way that makes this easy for the masons,” Madden said.

Artisan’s most impressive benefit for Madden, however, is the patented dry-cast manufacturing process that allows for the color to be fully integrated throughout each masonry unit, not just on the surface as with wet-cast manufacturing.

“Integrated color was one of the big reasons we moved from a wet-cast product to Artisan,” Madden said. “There are a lot of jobsite efficiencies. With other products, scratches stand out; with Artisan, you don’t notice it. And if you cut a piece for a corner, you don’t have to hide the edge; it blends in.”

“Most people have no idea it’s not real stone until I tell them,” Madden said. “Now, when I go back and look at the products I used to use, there’s no comparison. “

J. Madden Homes currently has six additional homes in production, with more in the pipeline, all exclusively using Artisan thin veneers. When asked why other homebuilders should consider switching to Echelon's Artisan Veneers, Madden says: “It looks great, and it installs well. And we have fewer callbacks, thanks to the integrated color that looks good even after a lawnmower throws a rock and dings it. It’s also a great costing product in comparison to other veneers.”